JJP Newsletter. The latest news in Indonesian IP, right to your inbox. 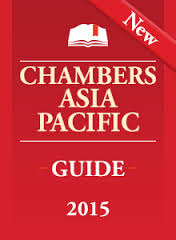 Chambers Asia-Pacific has once again ranked Januar Jahja & Partners as one of the top Intellectual Property law firms in Indonesia in its 2015 guide. Additionally, JJP attorney Prudence Jahja and consultant Andrew Diamond were both listed as “Ranked Lawyers”.

Receiving a “Band 2” ranking, JJP was described as a “boutique firm which fields highly experienced practitioners with a strong focus on handling trade mark matters for international clients.” Chambers noted that the firm is “[s]killed in contentious matters, particularly trade mark prosecution.”

Most rewardingly, one client is quoted as saying, “”We have always found JJP to be excellent, especially in terms of their responsiveness and providing proactive advice. Their ability to turn work around quickly, and explain local legal issues has been excellent for us.” Another client described JJP as “[v]ery responsive and efficient in their work.”

Senior Associate Prudence Jahja was named an “Associate to watch” as well as a “Ranked Lawyer”, with Chambers stating that she “is praised by interviewees, who note that ‘she is absolutely top-notch’ as she ‘provided round-the-clock service.’”

Foreign IP consultant Andrew Diamond was listed in Band 1 for “Intellectual Property: Foreign Legal Consultants – Indonesia” with interviewees describing him as “‘very helpful in establishing good working relationships’ and ‘facilitating smooth communication,’ while another enthused that they ‘could not speak highly enough of him.’”

The full listing for Chambers Asia-Pacific’s Intellectual Property – Indonesia Guide can be found at: http://www.chambersandpartners.com/111/34/editorial/8/1#RankedFirms_Tab.

Established in 1986, Januar Jahja & Partners (JJP) is a leading boutique IP law firm based in Jakarta, Indonesia. Its expertise and professionalism in handling all aspects of Indonesian IP law have resulted in numerous rankings and accolades, including from the Legal 500, WTR 1000, Managing IP, Chambers & Partners, Asialaw Profiles, and IP Stars, among others. For more information, please visit www.jahja.com.

About Chambers and Partners

Chambers and Partners has been researching and ranking the best law firms and lawyers through its The Chambers Guides since 1990. The Guides now cover 185 jurisdictions throughout the world.  For more information, please visit: http://chambersandpartners.com/.